Could The Innocent Gas Pump Handle Be The Filthiest Item You Touch?

Turns out YES!  The gas pump handle was identified as the filthiest surface Americans may encounter….who knew?  Would you have thought that gas pump handles, ATM buttons, mailbox handles, and escalator rails had anything in common?  According to a study released by Kimberly-Clark Professional, a unit of Kimberly-Clark Corp, the personal hygiene giant, these are among the dirtiest surfaces we touch every day.  The study was carried out in six major U.S. cities.  Trained hygienists swabbed frequently touched surfaces in high traffic areas in Atlanta, Chicago, Dallas, Los Angeles, Miami, and Philadelphia using an instrument that monitors sanitary conditions in industry, and analyzed a total of 350 surfaces.

The test checked for levels of Adenosine Triphosphate (ATP), which is used in food hygiene and signals the presence of animal, vegetable, bacteria, yeast, or mold cells.  Surface reading levels with ATP of 300 or higher suggest high risk of contamination of a transmitted illness.  The tests revealed that the following surfaces had ATP counts of 300 or more:

So, even if you do not drive or own a car you are still at risk for contracting germs at other surfaces used daily. The study results may or may not surprise many readers, but shows that we need to take care against germs at our workplaces and in public places, which surprisingly lists everything else but public toilets!  Another place to avoid are the public water dispensers in public places.

Dr. Charles Gerba, a microbiologist at the University of Arizona, who helped designed the study stresses the importance of keeping surfaces clean and washing hands frequently throughout the day to prevent getting sick and spreading illness. Continue to wash your hands and use the hand sanitizers and alcohol dispensers whenever you can.

Posted by Shaanthz on October 26, 2011 in General, Healthcare

Pasta Salad with Cranberries and Peas 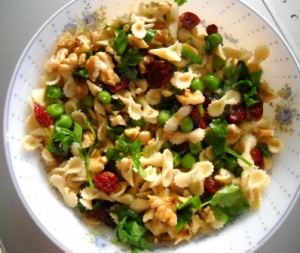 Pasta salads are one of the very easy and convenient mini meals that are appealing to children and adults.  Pasta, of course, is the main player in the game.  Most pasta salads are creamy and heavy.  I like my pasta salads light and so you’ll find no creamy dressing holding the salad together.  And, somehow I find the pasta salads are usually made with larger pasta.  I found tiny bow-tie pasta that is ideal for soups.  I began with the intention of making soup for lunch, but ended up with a pretty pasta salad, complete with green peas, cranberries, crunchy walnuts, and a very simple dressing of extra virgin olive oil and fresh lemon juice. 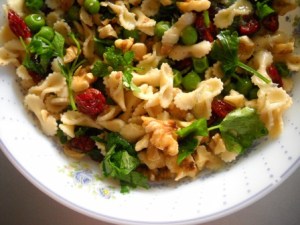 The tiny pasta with peas and ruby-red cranberries will surely appeal to children.  Put this beautiful bowl of pasta salad in front of kids, and I’m sure they will want to try it.  Well, even if the kid(s) in your house doesn’t feel tempted to dig in, you should try it.  It is light, delicious, and healthy too!  Half a cup of frozen peas has only 5% of your daily value of sodium. Peas are a good source of vitamin A, vitamin C, folate, thiamine (B1), iron and phosphorus. Pulses are rich in protein, carbohydrate and fiber and low in fat. Cranberries are full of antioxidants, which protect cells from damage by unstable molecules called free radicals. The health benefits of cranberries include prevention of urinary tract infection, lowering cholesterol, and cancer prevention.

Posted by Shaanthz on October 26, 2011 in Recipes, Vegetarian

Pumpkins and squashes are in plenty with the arrival of Fall.  Pumpkins make their way to Halloween lanterns and adorn many homes.  Candles, soaps, and home accents showcase the gourd in all its glory.  Pumpkins are widely used in pies, breads, muffins, cookies, and all kinds of desserts.  It also finds its way into stews, soups, casseroles, and gratins.  Curry….not so much in the U.S. But, in some other parts of the world like India, pumpkin curry is common and since fresh pumpkins are available all year round, it is frequently eaten with rice or flatbreads.  Here is a simple and quick pumpkin curry with healthy chicory greens that can be eaten with some crusty bread or rice.  Chicory greens are slightly bitter and not as popular as spinach, kale, etc. You can use any of your favorite greens or prepare the curry without the greens; however, the bitter greens beautifully complements the sweet pumpkin. Turmeric lends a vibrant color and coriander and cumin bring a warm earthy taste to the curry.  Pumpkins are rich in beta carotene, giving it the bright yellowish-orange color.

Ingredients I used for the curry:

A small piece of ginger, minced

A pinch of salt

Posted by Shaanthz on October 23, 2011 in Recipes, Vegetarian 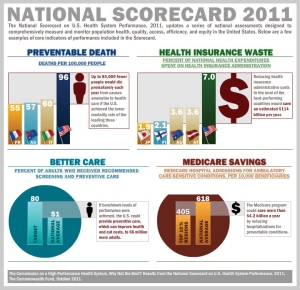 The Commonwealth Fund, a New York based healthcare foundation, released its National Scorecard, 2011, which updates a series of national assessments that measure and monitor population health, quality, access, efficiency, and equity in the U.S.  After assessing 42 healthcare indicators of quality, access, cost, performance and other measures, the U.S. scored 64 out of 100 on its performance compared to best performing countries, states,regions, and healthcare plans.  In 2006, the Fund’s first report gave the U.S. a score of 67, followed by 65 in 2008.

The scorecard portrays a unique assessment of the ways in which the nation’s healthcare system is underperforming and failing, and shows the areas it has gotten better.  The scorecard showed improvements in quality-of-care indicators that were the focus of public reporting and other initiatives.

Promising improvements were noted in effective care for chronic conditions like high blood pressure control, hospital performance in preventing complications from surgery, and treating heart attacks, heart failure, and pneumonia.  Preventable hospitalizations dropped by 13 percent probably due to improved disease management.  Cigarette smoking dropped to 17 percent in 2010 from 20 percent in 2004, with Utah and California exceeding the Healthy People Goal 2010 of 12 percent.  However, the rate of deaths that might have been prevented with timely and effective care—improved 21 percent in the U.S. between 1997–98 and 2006–07 (from 120 to 96 deaths per 100,000).  Nevertheless, rates improved by 32 percent, on average, in 15 other industrialized nations, with U.S. at the bottom of the list with a rate 68 percent higher than the rate in the leading countries.

The U.S. does poorly in how efficiently healthcare resources are utilized, treatments are wasted, while limiting administrative costs.  Nearly 44 percent of adults, 81 million, were either uninsured or underinsured but had medical bills that were high relative to their incomes.  Rate of re-hospitalization for some conditions were as high as 20 percent.

The Commonwealth Fund report argues that “fundamental to a high-performing health care system is having ample capacity to innovate and improve.” This requires a skilled healthcare workforce, payment and insurance benefits that motivate consumers to make optimal use of the system, continued quality improvement, public health initiatives, and research.  Some of these issues will be addressed by the Affordable Care Act that makes investments in prevention and provides incentives to encourage physicians to select and maintain primary care careers.

The report states that “Successful implementation of reforms will require stakeholders at all levels to adopt a coherent, whole-system approach in which goals and policies are coordinated to achieve the best results for the entire population. By integrating all components of the health system to ensure better access, higher quality, and greater value, we would be far more able to safeguard the health and economic security of current and future generations.”

Posted by Shaanthz on October 19, 2011 in Healthcare

1 in 4 Surgeons Insures Their Hands

According to a survey conducted by Truth on Call for MSNBC, 1 in 4 surgeons insures their hands.  Of 100 surgeons surveyed, 24 surgeons insured their hands, 37 do not, and 39 are considering doing so.  Joseph Colella, bariatric surgeon and director of robotic surgery at UPMC’s Magee Women’s Hospital, insures his hands for about $8 million.

Insurance policies can cost surgeons millions of dollars in premiums; however, many surgeons say the policy is worth the cost.